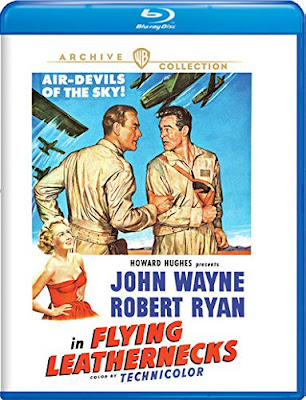 Flying Leathernecks (1951) is an unusual entry in World War II cinema. While it leans into the familiar camaraderie and hijinks of many war films from the era, it offers a few visceral glimpses at the violent realities of war. This is most likely due to the influence of director Nicholas Ray, who was stuck with an assignment that ran opposite to his beliefs. I recently viewed it on a new Blu-ray from Warner Archive.

John Wayne and Robert Ryan star as Major Dan Kirby and Captain Carl “Grif” Griffin respectively. Kirby has been enlisted to lead the Wildcats Marine squadron as they head into what would become the historic battle of Guadalcanal. While the unit members had assumed that Grif would be promoted to commander, they accept their new leader, as does Griffin, who is disappointed to not get the promotion, but takes the rejection in stride and apparently with little surprise.

While they respect each other on a certain level, the men butt heads. Griffin believes in the human touch, and focuses on building strong relationships with his pilots, while Kirby is determined to face his tough job with a hardline approach. That perspective is at odds with the tenderness of his home life, where he is gentle and adoring with his wife (Janis Carter) and physically affectionate with his young son (Gordon Gebert), if in a macho way and after gifting him with a Japanese sword. It is possible that there is a divide between what Kirby assumes he has to do and what he feels.

Grif seems to understand Kirby’s conflict on some level. He doesn’t like his methods, but he doesn’t entirely write him off. Ray wisely gives them plenty of space to talk it out in long scenes that revel in the charisma of both stars. Perhaps they were both too old for their roles, but in these moments I enjoyed their presence enough that I wasn’t concerned about such details.

The supporting cast is sturdy, if not exciting. A standout is Jay Flippen as crinkly-eyed line chief and undercover supply thief Clancy. He has a face for Westerns, which is mostly what he did throughout his career, and here that quality lends some needed character and warmth to the proceedings.

As was typical of mid-century war films, the battle scenes are framed for the most part as action set pieces, but you get a glimpse of the horror these men are enduring. When they are shot, they don’t just flail around; you see the blood and the way their eyes throb with pain.

Ray was anti-war and you can sense him sliding some of his viewpoint into a studio assignment. However, for the most part the film feels like a high-flying Howard Hughes production, with its extended air battles and patriotic certainty.

Fans of World War II films will enjoy it. Ray fans won’t see the director they love here. For the most part, it is the push and pull between Wayne and Ryan that gives this production spice.

The only special feature on the disc is a trailer for the film.