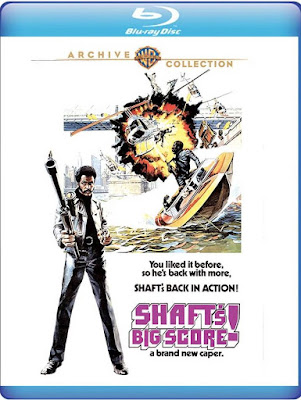 I was thrilled when Warner Archive announced it would be releasing the two sequels to the original Shaft (1971): Shaft’s Big Score (1972) and Shaft Goes to Africa (1973) on Blu-ray. I’d wanted to see these films for years. They ended up being interesting viewing and not what I expected when it came to plot and style.

Both films look great, because the restorations didn’t iron out the grain that gives these films added warmth and grit. I know it shouldn’t surprise me that a Gordon Parks film would be so gorgeous, his visual skill as photographer and filmmaker are immense, but I was especially stunned by the color composition in Shaft’s Big Score. These films will always be filed under Blaxploitation, but they are really gorgeously-produced, high-quality action films and the Blu-rays reveal that beautifully.

The John Shaft in these sequels is still tough, charismatic and resourceful, but the character doesn’t have the same edge. There was always a flicker of righteous anger in the 1971 Shaft. You don’t see the man who walks through traffic shouting at taxi cabs here. He’s more serene and much nicer to the ladies too. While I missed the zing of that brand of Shaft, it was interesting to see Roundtree develop the character and move him subtly in a different direction.

Shaft’s Big Score was my favorite of the two films. It’s got a slow build up, and lacks the riveting, gritty street-bound feel of the original, but it entertains in its own slick way. Roundtree seems more settled into the action hero mold and more appealing because of his gentler take on relating to the female sex. He even relies on one of his ladies to take the wheel during the climactic chase scene, which becomes increasingly ridiculous, and entertaining, as it progresses.

That chase scene is emblematic of what makes Shaft’s Big Score different. It’s less a document of a man working in the streets and more about building up to blood-pumping action. Roundtree is able to stay true to the essence of John Shaft, but when you add a boat and a helicopter to your chase scenes, it is definitely a different game.

Keep your eyes open during the casino scene to see the always distinguished director Parks in a cameo. 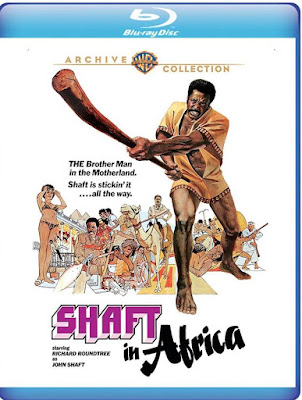 Shaft Goes to Africa is my least favorite of the original trio, but I appreciated the willingness to try something new with the character. It was a good gamble to assume that Roundtree was the true draw of the series and that he was versatile enough to play Shaft in a different milieu. Here, instead of a street-smart private dick, he’s more of a Bond-type hero fighting against human trafficking in Africa. There’s even a Q-like scene where he gets a custom-made weapon.

This film never quite falls into a rhythm though. Its story always feels a bit scattered. There are many good to great moments, but they don’t flow together. Many of the great moments are due to Vonetta McGee, who matches the charisma of her leading man and is the strongest female character to grace the series.

Overall, the original Shaft series fascinates me. Roundtree consistently proves his ability to mesmerize in any circumstances and he benefits from the essentially high production values and strong direction he receives here. While they vary in quality, there isn’t a bad film in the bunch.