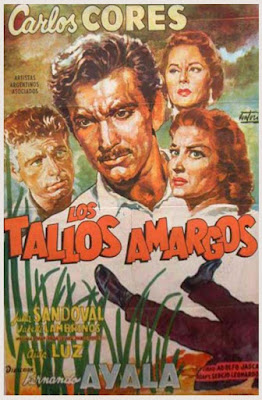 One of my greatest disappointments of TCM Classic Film Festival this year was that I could not get into the opening night screening of the Argentinean film noir The Bitter Stems/Los Tallos Amargos (1956). I was thrilled to have another chance to see this rescued film at a SIFF screening this afternoon.

Eddie Muller of the Film Noir Foundation introduced the film, and while I hear he can drive schedule-driven festival organizers mad with his long introductions, they're only lengthy because there is so much to be said about the films he presents. In this case, it was an especially fascinating story.

Essentially, Muller was enticed into traveling to Argentina, where he was treated to screenings of some of the locally-filmed classic noir gems. Intrigued by what he saw, he returned to the country on his next vacation with plans to restore and circulate some of these films.

The Bitter Stems was one such find. It was rescued from poor storage conditions at a remote family estate. Many of the other films found at this location were beyond repair. While Stems was in bad condition, it was salvageable. Though it was missing its soundtrack, a 16mm version of the film was available and its soundtrack was digitized and added to the restored print.

That's a very much condensed version of the film's restoration story. I think Muller could have spoken for another hour and the audience would have welcomed it. If you get the chance to see this passionate advocate for film preservation speak, make a point of seeing him. He has a lot of great stories to share and I always come away from his talks with fascinating new information.

The film stars Carlos Cores as Alfredo Gaspar, a journalist who gets roped into a seamy journalism correspondence course scheme by European immigrant Liudas (Vassili Lambrinos). Put in a distrustful state of mind by their shady business, Gaspar suspects his partner of giving him the same raw deal they're giving their customers. His suspicions cloud his judgement, and an ill-advised attempt at revenge derails his life.

It took me a while to get into Stems. I felt like it was going down a familiar path of betrayal and retaliation, and I began to get restless when I thought I had it all figured out. Then the story took a fascinating turn, which moved the plot in a surprising direction. It essentially takes the kind of misunderstanding that drives a typical screwball comedy and paints it in the bleakest terms.

Because of the way The Bitter Stems switches gears, the relationship that drives it at the beginning is suddenly torn down and built into something new. It's an unsettling scenario, because there's so much charm on the surface, and only one character can see how horrid the situation truly is. Living alone with that knowledge tortures him, and he goes mad in a fashion much like the man imagining the throbbing heart of the corpse below the floorboards in Edgar Allen Poe's The Tell-Tale Heart.

This print of The Bitter Stems was one of the only, if not only 35mm screenings of SIFF 2016. I have to admit that in the past I've never entirely appreciated the difference between film and digital. There was something about this screening that helped me to understand though. I think it helped that it was such a visually striking film, so that I was already drinking in the imagery with extra enthusiasm, but other than that, I don't know why it suddenly hit me how much better it was. I finally could see how warm the picture was compared to digital images, and how that bit of softness it emanates makes the images so much more sensual and inviting. It was an exciting revelation for me.

During the screening, I noticed some odd behavior from the audience that I took to be a bit of cultural discomfort. There were a few moments where the interactions between the characters, or the drama of the music drew scattered laughs; and it seemed mostly because the visual cues or the mood were slightly different from that of northern-based cinema. It made me think of the awkward laughter you sometimes hear at silent film screenings. It wasn't much of a distraction, but I thought it interesting how the slightest of differences from expected behavior can make an audience uneasy. It seems even people who love movies so much they'll go to Argentinean film noirs on a sunny day could benefit from expanding their cinematic vocabulary. And isn't that what makes SIFF so amazing in the first place?