Warner Archive: Anne of Green Gables and a Pair of Clever Canines 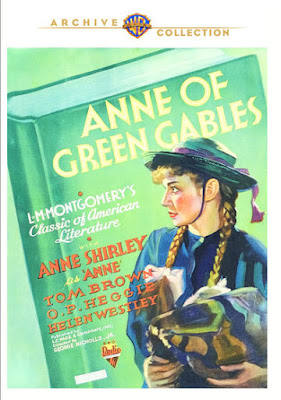 I recently had the opportunity to view a trio of family-friendly films from Warner Archive. Anne of Green Gables (1934), My Pal, Wolf (1944) and The Littlest Hobo (1958), each have their distinct charms and were fun to watch.

In a smoothly-executed, if jam-packed, RKO production the first novel in Lucy Maud Montgomery's Anne of Green Gables series gets a brisk treatment. Abandoning her remarkable previous stage name Dawn O'Day, Anne Shirley stars as Anne Shirley. Inspired by her role in the film, the actress would keep this more easily digestible name for the rest of her career.

Shirley is suitably dreamy and determined as Anne, the girl who is adopted by brother and sister Marilla (Helen Westly) and Matthew Cuthbert (O.P. Heggie). Though the pair had hoped for a boy to help maintain their Prince Edward Island property, Anne tugs at them and they agree to let her stay. She goes to school and falls in love with Gilbert (Tom Brown), the one boy who is absolutely forbidden to her by her new family.

This was the second Hollywood treatment of the book, following a 1919 version starring Mary Miles Minter. Shirley would return to the role again with a completely different cast in Anne of Windy Poplars (1940)

In trying to cram the action of an entire book into 78 minutes, the movie often has feel of an assembly line of plot points whizzing by. Years pass in moments. While the film doesn't accomplish the impossible task of translating all the charm of the books to the screen, it does slow down enough so that you can get to know the makeshift family at its heart. Heggie is particularly magnetic as Matthew, providing ample proof that a man doesn't need words to be a brilliant communicator. 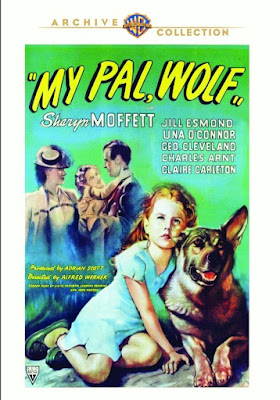 Though similarly brief, My Pal, Wolf (1944) approaches its story with a more leisurely pace. It is the screen debut of the delightfully unmannered Sharyn Moffett, a child actress who had an unfortunately brief film career. She stars as Gretchen, the daughter of a pair of workaholic parents, who spends her time at the family's country estate, cared for by a gaggle of servants and entertained by sympathetic local family of much more modest means.

Known for telling tales, no one believes the girl when she claims she has found a wolf and is caring for the animal. It is actually a highly-trained army dog that has gone AWOL. Despite the interventions of her strict new governess (Jill Esmond, more famous as the first Mrs. Laurence Olivier), she insists on visiting the dog and bringing him food. While this seems generous in theory, it's a little scary to see her face-to-face with such an enormous animal. Highly-trained or not, he's got gigantic teeth.

Moffett has become one of my favorite child actresses. I reviewed her later film Banjo (1947) last year and in both roles I was impressed with her naturalness in front of the camera. Here she seems completely unaware of her movements, letting her body fall into the familiar slouches and sprawling of a restless eight-year-old. She's lovable because rather than trying to play up to her audience, she seems completely absorbed in her own activities. 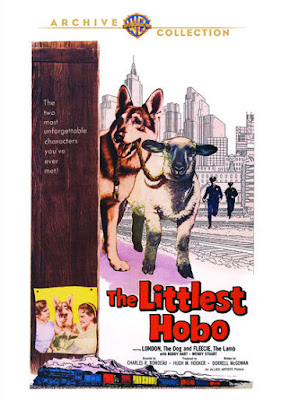 While a pair of child actors have a prominent place in the plot of The Littlest Hobo (1958), the stars of this addictively charming movie are a brilliant German Shepherd and the lamb he has saved from the slaughterhouse. While that might sound like a cutesy plot for a movie, the result is much breezier and briskly entertaining than you'd think.

The dog is a restless soul, traveling the rails and charming itself into the odd free meal. One day he hops off the train in Los Angeles and jogs around town looking for action. He sees a distraught boy (Chester Anderson) selling his pet to a meat company; the orphanage where he lives can't house the animal.

Coming to the lamb's rescue, the dog chews through the rope tying him to the loading dock at the slaughterhouse, body slams the man who bought the animal to the ground and drags the confused sheep away. For most of the rest of the movie, the German Shepherd drags his new friend around as they evade the cops, missionaries, hungry homeless men and anyone else who tries to capture them.

I can think of so many ways this movie could be corny, overly sentimental or too broad, but it rarely is. There's a cheerful naturalness to it, which is helped along by a jaunty, jazzy score and theme song. The mid-century LA locations are interesting from a historical standpoint, and they give the action just the right amount of grit.

It's also so much fun to see this clever dog trotting along, flirting with poodles and trying to do  good. He's actually a much better actor than most of the people in the film. While I did feel sorry for the lamb, who looked a bit miserable being dragged along in some of the scenes, the pair look so funny running around together. I never got tired of watching them.

This pleasant, airy film was popular enough to inspire two long-running Canadian television series about Hobo. I can see why; watching him at work is strangely fascinating. In fact, I've already watched it again and I don't mind that the theme song is still running through my head.

Many thanks to Warner Archive for providing a copies of the films for review. These are Manufacture on Demand (MOD) DVDs. To order, visit The Warner Archive Collection.
Posted by KC