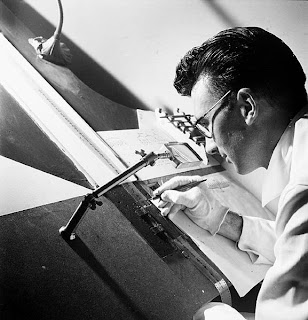 Several years ago, I went to a private outdoor movie screening. It was in the backyard of a friend of a friend. Apparently the guy worked at an independent theater, and he'd collected a lot of his own films which he liked to share with friends from time-to-time. He projected them onto the back of his duplex with an old reel-to-reel projector. So there we all were with our blankets and pillows watching movies in a backyard. Very cool.

The main feature was Skidoo (1968), which wasn't available anywhere at the time. I was looking forward to hearing the soundtrack by Nilsson, my current music crush.

I was almost more charmed by the short films the projectionist showed first. They were mostly experimental, things like Frank Film (1973).

Another short he showed was a A Chairy Tale (1957), a clever silent by Scottish-born Canadian filmmaker Norm McLaren. It stars a guy (Claude Jutra) and an amusingly animated chair. The soundtrack is by Ravi Shankar, and you'll see that it is a character as well. This got a lot of laughs from the crowd:

I thought about A Chairy Tale the other day, and decided I really wanted to show it to my daughter. I quickly found it on YouTube. She loved it so much that she asked me to play it again. Anytime my little girl wants to see a classic again, the answer is yes. I know she takes advantage of that, but I'm always happy to let her geek out. And that particular film had such a great message of cooperation, something five-year-olds can never overlearn. Check out this post for production shots and more about the film.

Anyway, I wanted to see what else McLaren had done. I found Dots (1940), which is completely different from A Chairy Tale. He didn't even film this, but rather made marks directly on the film, apparently because when McLaren started out, he didn't have a camera:

Boogie-Doodle (1940) is also drawn directly on the film. It's a bit more conventional:

I have to admit I got tired of that one after about a minute, but it's still cute.

By this point, I thought I understood the McLaren style, fascinating animation, a little innovation and a goofy sense of humor. I think that's somewhat right, but this next film is definitely not goofy. Pas de Deux (1968) is beautiful, moody and astonishing. I got so wrapped up in this the first time I saw it that I felt intoxicated. You can't be in a rush with this one. It is worth a bit of patience:

Can you believe the diversity of this guy? And yet it all these films have his signature. It was so much fun discovering Norman McLaren's films. I've got a lot more to see.

Are there any great filmmakers you've come upon like that just dinking around online? Discoveries like that are one of my favorite things about the Internet.
Posted by KC