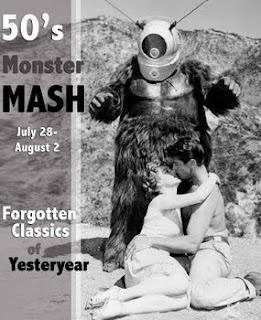 I first heard about Robot Monster from an ad for a local theater. They had this series called “Movies You Have to Be Drunk to Enjoy”, or something similar. At the time, I was disappointed that I was not going to be able to make the one night showing. When I saw the photo of the alien in the ad (see above), I knew that I would probably enjoy this flick.

That is because this has to be one of the most ridiculous movie aliens ever created. The body is that of a hairy, obese gorilla. The head is swathed in a nylon stocking, and then covered with a diving helmet with perky antennae jutting out of the top. That’s right, this is a mostly organic being that apparently has a robotic head. I think. The real story is that the director Phil Tucker knew a guy with a gorilla suit who would work for nothing, but that doesn’t help with the fictional side of things.

Robot Monster packs a lot more silliness into a mere 76 minutes. It is a compact piece of bad movie bliss, though you may understandably feel like you’ve been watching it for much longer.

The movie starts with little Johnny and his sister Carla. After he blasts her with his space gun and a few bubbles, she asks him for the first of many times if he’ll play house. They are interrupted by sharp banging sounds. When they investigate, they find a pair of archeologists chipping around ancient cave drawings which have miraculously survived the passage of time in the outer walls of the cave. The boy’s widowed mother and his grown sister Alice join them and scold the kids for running off.

Reunited, the family returns to their picnic spot, which sits near a pile of rocks in the direct sun. Somehow, they all manage to settle down for a nap in this hideously uncomfortable place. Johnny wakes up, and runs back to the cave. A bolt of lightning strikes him to the ground.

What follows is Johnny’s crazy end-of-the-world dream. In this nutty nightmare, his mother and old sister wear identical white dresses, his father has been replaced by the eldest of the archeologists, who is now a professor and the whole family lives in the basement of a bombed-out house that is ringed with layers of live electrical wire. Apparently this prevents the alien Ro-Man from hearing and tracking the family, who are among the last few humans (or as Ro-Man would say, Hu-Mans) on earth.

Somehow, furry, bumbling Ro-Man has destroyed the rest of the planet with his death calcinator ray, an invasion of stop-motion dinosaurs and a baby alligator with a fin taped to its back who wrestles with a lizard (or Gila Monster? I wasn’t sure). Much to the gorilla robot’s chagrin, the professor has tested a germ-fighting serum on his whole family and it seems to also make them death ray-proof.

The rest of the movie is a battle of wills, not only between Ro-Man and the pesky remaining Hu-mans, but also Alice and the hunky younger archeologist who is the professor’s assistant in Johnny’s dream world. Of course the latter pair end up in love, though Ro-Man makes a play for Alice and tries to convince his intergalactic supervisor, the Great One that she should be spared “for reference”.

Convinced that Ro-Man has bungled his earth assignment, his boss blasts him and what remains of the planet. Then Johnny wakes up and realizes it was all a dream. Or was it? You’ll get the answer to that question a whopping three times in a row.

The only way to do true justice to this astonishing movie is to go through it minute-by-minute. There are so many articles online that do this better. I’ve put the links to my favorites at the bottom of the post.

What I’ve decided to do instead is to share some of the more bizarre moments from the flick:

1. This is the only movie I’ve seen where a bubble machine gets prominent screen credit. As far as I know, this is the sole movie role for the Automatic Billion Bubbles Machine, which is a part of Ro-Man’s equipment, though I was never sure why. We all know there’s nothing more menacing than bubbles, as evidenced by that master of horror Lawrence Welk. Maybe that is why the Robot Monster is always surrounded by a swath of the floating orbs whenever he is standing at the mouth of his cave lair.

2. No one ever needs to die at the hands of the Robot Monster. All anyone ever has to do is slowly walk away and he could never catch up. There are several long shots in the movie of Ro-Man awkwardly wandering the canyon, looking like a hirsute Teletubby. He’s about as agile as the Cowardly Lion and equally scary. Instead of simply walking away, the child actors stop and wait for the monster to approach them, because if they ambled away, we wouldn’t have a story. Sister Alice makes the mistake of trying to run away, which of course means that she trips over a rock. Hasn’t that dame ever seen a movie?

3. The soundtrack is an early score by Elmer Bernstein, who is understandably better known for the classic themes in adventure flicks such as The Magnificent Seven and The Great Escape. It’s pretty good, though it can get a bit too cutesy during the scenes with the children. There are some effective themes and an overall feeling of dark grandeur. Unfortunately, all this pomp sounds a bit goofy when paired with a gorilla in a diving helmet waddling up and down the sides of a canyon.

4. As you can’t see Ro-Man’s face, the actor in the suit is forced to emote solely with body language. Since his body is less than flexible, the bulk of Ro-Man’s motions are angry arm thrusts, which often do not correspond with his dubbed lines. The gorilla-bot’s most menacing move is to shake his paw in the air as if he is trying to chase a group of pesky kids off his rock pile.

5. Some of the things Johnny dreams seem a bit strange coming from the mind of a young boy. Why would he imagine one sister getting busy with a scientist and nearly molested by an ape, while the other is strangled to death? Not to mention completely writing his father out of his life so that a German science professor can be his dad instead. I’m a bit concerned about Johnny.

The Professor: He is impervious!
Alice: Unless. . .we can find his weak spot!
--
Roy: I'm bossy? You're so bossy you ought to be milked before you come home at night.
--
Johnny: [to Ro-Man] You look like a pooped out pinwheel!
--
Great One: Have you made the correction?
Ro-Man: I need guidance, Great One. For the first time in my life, I am not sure.
Great One: You sound like a Hu-Man, not a Ro-Man. Can you not verify a fact?
Ro-Man: I meshed my LIP with the view-screen auditor, and picked up a count of five.
Great One: Error! Error! There are eight!
Ro-Man: Then the other three still elude me. Is it possible they have a counterpower?
--
Ro-Man: I cannot - yet I must. How do you calculate that? At what point on the graph do "must" and "cannot" meet? Yet I must - but I cannot! 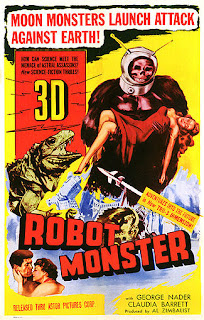 Email ThisBlogThis!Share to TwitterShare to FacebookShare to Pinterest
Labels: Blogathons